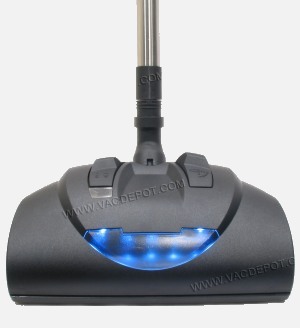 There are many features in the new Wessel-Werk EBK360 powerbrush to be admired. LED headlight array, sculptured augured brush roller, 5-position step on height adjuster and redundant cooling systems just to name a few. But it is what’s missing in the new EBK360 powerbrush that gets us the most excited about the new design.


Like most other electronic systems these days the powerbrush has gone hi-tech. When the rubber belt was replaced with the geared belt it was technology that became responsible for the upgrade. While rubber belts are slow, underperform and often need replacement due to wear, they did have one great feature – they would break. Breaking the belt does not sound good to most folks, but the alternative would have been much more costly permanent damage of the powerbrush motor. Rubber belts are cheap & easy to replace. Powerbrush motors are neither cheap or easy to replace. 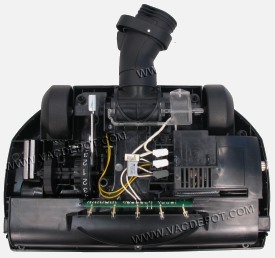 If while vacuuming you happen to find the dish towel that Jake your sheppard pup moved from the kitchen to under the sofa your rubber belt driven carpet vacuum nozzle would emit a screeching noise. This followed quickly by a puff of smoke and the dreadful “snap” of your vacuum belt breaking. This was a cheap low-tech approach to motor protection developed in the early 1900’s. New vacuum systems use geared belts which do not slip or stretch. These new vacuum nozzles use high speed rollers that can spin 2 – 5 times the speed of rubber belt systems, up to five thousand revolutions per minute. To control this process the powerbrush circuit board was born, and it was complex. Along with jam protection to shut the motor down if the brush roller could not spin (due to a clog or damage), the circuit board was also filled with sensors of all types; under current, over current, free-spin and high drag.

The control boards had LED indicators, adjustable potentiometers and many had push-button circuit breakers. The circuit boards in vacuum cleaners have seemingly become an arms race in components, only to be topped by vacuum cleaners now running software. Even the vacuum cleaner has outsmarted the computers once used to put a man on the moon in the 60’s. 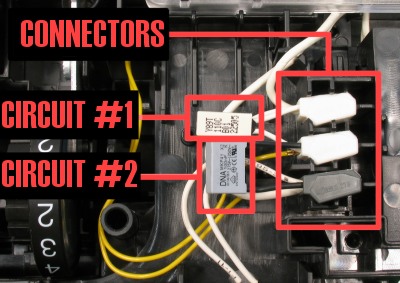 In a stunning leap forward the EBK360 has for the first time done away with the “circuit control board”. Advanced design has lead to a simple answer for controlling the geared belt drive system. In the case of the EBK360 a short circuit, or a truncated track is a good thing. Fewer parts with lower replacement cost and higher reliability are now provided in a conectorized environment within the EBK360.

In addition to the motor mounted self-resetting thermal breaker, a single circuit self-resetting overload protector takes the place of old fashioned mechanical push-button circuit breakers. To assure proper activation of the circuit protector and eliminate EMI feedback from the motor an inline electronic noise suppressor smooths out the power delivered to the system. That’s it! The entire control system is held in two external modules with three inline connectors. The new control system is a hi-tech back to basics solution provided by quality software & hardware engineering instead of the continual escalation in a war of components mounted to a circuit board. Doing more with less leads to higher reliability and user satisfaction. We never like circuit boards in power nozzles, that’s why the new electrical system in the EBK360 is our favourite new feature. We understand & agree – a new control system is not exactly a “sexy” design upgrade – but there is always the cool LED headlight array (if your into that sort of thing).