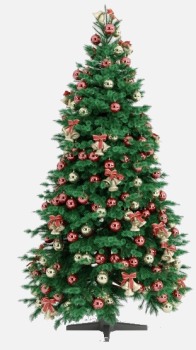 Beginning in January a very unique phenomenon occurs in the vacuum cleaner business, starting in our repair shop for portable vacuums. With a rush of vacuum cleaners for repair the first week after New Years day we begin to find peoples christmas tree’s. Clogged in the hose, jammed in the nozzle housing, stuffed in the wands and tools. Thousands and thousands of christmas tree needles just exploding from peoples vacuums. Soon after the initial rush of portable vacuum the calls begin for central vacuum service request. Seems the vacuum system has  “lost it’s pep”. Often after we remove a few pounds of needles from the system it is performing good as new.

I would say “don’t vacuum tree needles”, but I know my warning would only be ignored. In the rush to get the holidays over and done with your not about to get the broom and dustpan when you can just run the vacuum over it so much quicker. The satisfaction from the sound of all those needles being flushed away from your living room is magnetizing and nearly impossible to resist. Your vacuum was not made for such a task, but what the heck – you only live once.

As certainly there will be a rush of needle stuffed vacuums for repair the first week of January, there is always some poor soul that brings her vacuum to the repair shop in July. She tells us that  she got the new vacuum for Christmas, but it never worked right and she thinks she ‘got a clunker’.  A few minutes at the repair bench and you guessed it, Christmas in July.